A Win for Bahujan, UGC rolled back its Brahmanical 2016 gazette

JNU saw the strongest student agitation and protests where a student Dileep Yadav went on indefinite hunger strike and demanded that the decision should be nullified. 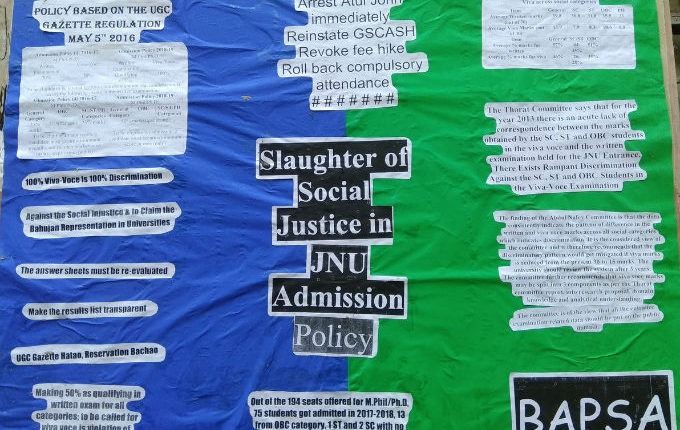 Share 0
Want create site? With Free visual composer you can do it easy.

In a remarkable decision, University Grants Commission roll backed its 5th may 2016 notification on Thursday, which prescribed a two part process for the admissions in MPhil/ Ph.D. programs according to this oral interviews, or viva voce were the sole criterion for admissions.

Adoption of this notification and its implementation in various universities such as University of Gujarat, Jawaharlal Nehru University (JNU), Delhi University (DU) faced a lot of criticism and protests by students. This notification led to the destruction of socially inclusive Admission Policies in M.Phil/ Ph.D. and became a tool in the hands of Brahmanical faculties which strengthened the discrimination of students from oppressed groups such as ST SC and OBC.

This notification suggested that the “entrance test” will have uniform qualifying marks of 50% across the categories, which meant that there were more chances of social exclusion and academic atrocity.

JNU saw the strongest student agitation and protests where a student Dileep Yadav went on indefinite hunger strike and demanded that the decision should be nullified.

Rahul Sonpimple said, I along with our Bahujan friends Dileep Yadav, Dawa Sherpa Dileep Kumar, Shakil, Prashant Nihal , Bhupali Magare, Mritunjay Singh, Mulayam Singh were suspended for protesting against Brahmanical UGC gazette. We kept fighting against both. After our suspension, many students joined the movement and fought without caring the fear created by casteist JNU administration and some casteist faculties (from both the camp – Right & left).

He further said, Finally UGC has decided that it will take back its draconian gazette. This was also the time when we saw the real faces of the so called progressive (Brahmanical) forces in the campus. But at the end struggle remains, hope remains.

Abdul Nafey committee, constituted by the JNU administration analyzed the admission related data and concluded that discrimination based on caste is, in fact, a reality, thus it recommended that the viva weightage be reduced from 30 % to 15 % in order to overcome this discrimination. There were similar data available from other universities as well which offered similar conditions of discrimination.

This model acted as a means to restrict the implementation of the constitutionally guaranteed reservation policy for those who have suffered the most. With such a restriction there was a visible decrease in the number of seats from minority communities, earlier in 2017 it was as low as 102 and this year the seat toll has reached 720 respectively.

In addition to the clause of written test as well as oral viva voce, JNU faced yet another provision of the new regulation – the cap on the number of Ph.D. students a teacher can supervise. Many prominent professors criticized the implementation of the same in JNU,

Ayesha Kidwai, argued in “How the new UGC regulations do affect prospective students applying to JNU? Kidwai stated that due to this regulation the seats will be reduced drastically and may center of JNU will not have a single seat of M.Phil/Ph.D, Due to this Regulation the admission policy will be affected and be disastrous for JNU, it will be a blow to social justice, and the researcher advisory committee will curtail the academic freedom in the campus.

The preamble of the Indian Constitution guarantees to its citizen that the State shall be provided justice (social, economic and political) and equality of status and opportunity to all irrespective of any biases.

Bhupali Magare said, “The struggle for Social Justice is complex and consistent. After witnessing the rejection by JNU authority to listen the students voices that demanded reduction in viva-voce to 10%, scrapping UGC Gazette, Implementation of Reservation, punishment to those who wrote racial dossier and other demands; after seeing the humiliation and targeting of students belonging to oppressed sections by so-called progressives n their regressive friends and by admin of JNU; this particular news that UGC mentioned that written test will be of 70% and Viva 30% is in a way a pro-student information. Definitely, it gives us little happiness, and this also tells us that we are yet to attain Social Justice, attain Gender Justice inside this campus and in the society we are living in.”

Article 38 of the Indian Constitution directs the State to secure a social order for the promotion of the welfare of the people. Article 38(1) states that “The State shall strive to promote the welfare of the people by securing and protecting as effectively as it may a social order in which justice, social, economic and political, shall inform all the institutions of the national life.

Thus social inclusion and welfare of people from all walks of life remain an important aspect of our democratic setup.

Social inclusion benefits people from all walks of life without any discrimination or hate crime towards any individual or group. Such inclusion policies are founded on the basis of Democracy, Tolerance, Acceptance, and respect for deference. These policies majorly focus on reducing exclusion and barriers to learning which promotes growth and development in return.

This landmark decision came after many protests and agitations by students thus making it important to note that how India’s democracy now is in the hands of its citizen who must protest, agitate, discuss and dissent in order to bring change.

Did you find apk for android? You can find new Free Android Games and apps.
Alya EktaduDUTAJNUMPhilPhD.UGC 2106 Gazette
Share 0